Background information about railway plans is in the blog - Big Plans.

Edinburgh & Northern Railway.     This proposed branch terminated at Newport Ferry Pier. At the Ferry-Port-On-Craig (Tayport) end it would continue to Leuchars and then to Cupar.

The Edinburgh & Northern Railway Company proposed, in November 1845, a branch to run from Cupar through Ferry-Port-on-Craig (Tayport), then along the coast to a terminus at the Newport ferry. It was one of many branches and proposals made by the company at this time. This part of the line was never built, instead a large harbour was built at Tayport and roll-on, roll-off train ferries (designed by Thomas Bouch) operated across the river.

The sketch map below is taken from the Edinburgh & Northern Railway (Cupar to Ferry-Port-on-Craig and Newport extension) plans, November 1845, at the National Records of Scotland, ref. RHP85261.

The solid red line indicates the positon of the proposed railway line. Apart from this, the plans show who owned, lived in, and had an interest in, every property along the proposed line. The properties are limited in scope to a small distance on either side of the railway line (the 'limits of deviation' - shown by red dashed lines), which is why some buildings are detailed on these plans while others, which are possibly more important, are not mentioned.

The numbers refer to the details given in the accompanying Book of Reference, given below.

There is another plan of this area for part of the Glasgow and Dundee Junction Railway.

[The map below covers the area from William Street on the east, to the foot of Boat Brae on the west. No. 63 is the Newport Hotel.] 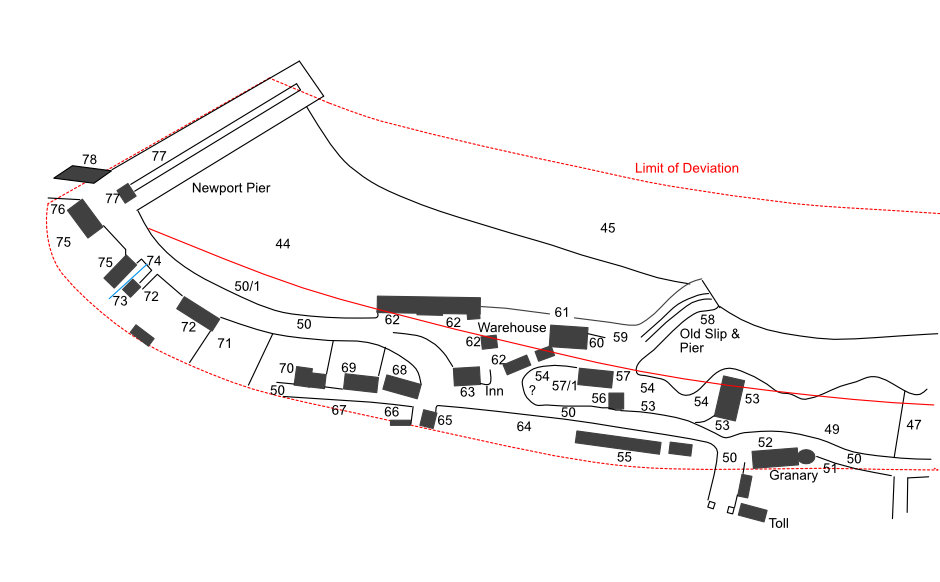 There is a ? shown just east of 63, Inn (actually Newport Hotel). On the original this is given as 45 - which it cannot be, as this refers to land below low water. A mystery.